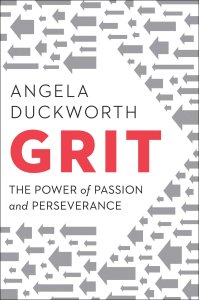 This review first ran in the May 24 edition of The Hamilton Spectator.

Grit: The Power of Passion and Perseverance

We chose to be positive.

We don’t freak out over ridiculous issues or live in fragile states of emotional catharsis or create crises where none should exist.

These are four of the 12 core values adhered to by the women’s soccer team at the University of North Carolina at Chapel Hill.

The team is led by Anson Dorrance. He’s the winningest coach in the history of women’s soccer with 22 national championships.

Dorrance’s father will tell you that his son is the most confident person with the least amount of talent that you’ll ever meet.

Dorrance takes it as a compliment.

“Talent is common,” says Dorrance, who captained his men’s soccer team in college and was nicknamed Hack and Hustle. “What you invest to develop that talent is the critical final measure of greatness.”

Dorrance has built a culture of grit to develop the full potential of his players. “If you want to create a great culture, you have to have a collection of core values that everyone lives.”

The team’s core values are a 50-50 split between teamwork and grit.

Every season, Dorrance has his players fill out the Grit Scale developed by Angela Duckworth, a professor of psychology at the University of Pennsylvania and author of Grit: The Power of Passion and Perseverance. Duckworth has done consulting work withthe White House, the World Bank, NBA and NFL teams and Fortune 500 CEOs.

So how do you get more grit?

Start by fostering and then following your passion. “Here’s what science has to say,” says Duckworth. “Passion for your work is a little bit of discovery, followed by a lot of development and then a lifetime of deepening.”

Grit is equal parts passion and perseverance. If you love what you do, you’re more likely to stick with it.

That’s key because you need to log thousands of hours of deliberate practice to realize your full potential. Deliberate practice is frustrating, uncomfortable and painful. Few of us are willing to pay the price.

“My guess is that many people are cruising through life doing precisely zero hours of daily deliberate practice,” says Duckworth.

Gritty people also pursue a passion that has a deeper purpose. “Most gritty people see their ultimate aims as deeply connected to the world beyond themselves. What ripens passion is the conviction that your work matters.”

Instead of waging a war for talent, Duckworth makes a strong case for hiring the grittiest people you can find and creating a culture that builds grit from the outside in.

“Our potential is one thing,” says Duckworth. “What we do with it is quite another.” So start doing hard things that interest you and stick with it. Grit will make you great.