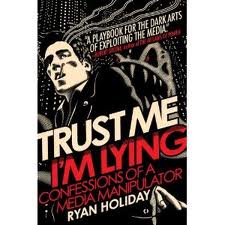 This review first ran in the Feb. 11 edition of The Hamilton Spectator.

Trust Me, I’m Lying: Confessions of a Media Manipulator

Got a local politician, member of the Fifth Estate, business or community leader who doesn’t share your view of the world? We’re here to help.

We custom-build campaigns to shame, silence and grind your enemies into submission. At Diatribe Partners, we don’t cast aspersions. We destroy reputations. Dissatisfaction guaranteed.

A winning combination of snark and self-righteous indignation will fire up and unleash the fury of real and fake Facebook friends and Twitter followers.

We’ll enlist the help of local hit-happy and traffic-hungry social media power users to recycle a steady diet of mis- and disinformation.

Together, we’ll blindside and bury your enemy with a barrage of well-timed tweets and posts crafted to be as viral as they are toxic.

We’ll bait your besieged and frustrated target into saying something regrettable that can and will be used against them over and over again in the court of public opinion.

We’ll manufacture online conflict and controversy that stands a good chance of generating offline coverage in the mainstream media.

And should your foe fight back, we’ll take a slight detour to the high road. We’ll claim only to be interested in having an impassioned constructive conversation and giving voice to the common people.

Holiday, who’s director of marketing for American Apparel and a freelance reputation manager, admits to having abused and misled social media to influence what wound up in the mainstream press. “I created false perceptions through blogs which led to bad conclusions and wrong decisions — real decisions in the real world that had consequences for real people.”

Those tactics and consequences can be ugly. “Online lynch mobs. Attack blogs. Smear campaigns. Snark. Cyberbullying. Trial by comment section. It is clear to me that the online media cycle is not a process for developing truth but for performing a kind of cultural catharsis,” says Holiday.

Anthropologists talk about ritualized destruction and degradation ceremonies. Colonial Massachusetts had Salem witch trials. Today, we have Twitter and Facebook. “Their purpose is to allow the public to single out and denounce one of its members,” says Holiday. “To lower their status or expel them from the group. To collectively take out our anger at them by stripping them of their dignity. It is a we-versus-you scenario with deep biological roots.”

And then there’s the predominance of snark and sarcasm in social media. People say online what they would never have the courage to say face-to-face. “There is a reason that the weak are drawn to snark while the strong simply say what they mean,” says Holiday. “Snark makes the speaker feel a strength they know deep down they do not possess. It shields their insecurity and makes the writer feel like they are in control. Snark is the ideal intellectual position. It can criticize but it cannot be criticized.

“Bloggers lie, distort and attack because it is in their interest to do so. The medium believes it is giving the people what they want when it simplifies, sensationalizes and panders. This creates countless opportunities for manipulation and influence.”

The economics of the Internet have created a twisted set of incentives, says Holiday. Traffic is more important and profitable than the truth. “When we understand the logic that drives these business choices, those choices became predictable. And what is predictable can be anticipated, redirected, accelerated or controlled.”

Diatribe Partners has decided to ignore Holiday’s final words of caution. “Part of writing this book was about a controlled burn of the plays and scams I have created and used along with the best of them,” says Holiday. “Of course, I know some of you might ignore that part and use this book as an instruction manual. So be it. You will come to regret that choice, just as I have.”