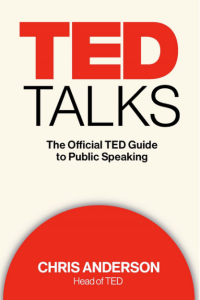 This review first ran in the July 18th edition of the Hamilton Spectator.

I turned in a performance the other week that should make me a first-ballot inductee into the public speakers’ hall of shame.

I inflicted death by PowerPoint three times on the same audience in a single day.

Sure, my slides looked good. No bullet points, unreadable charts or clip art. Just one exhaustively curated full-screen image with a single line of text per slide.

But the slides piled up and buried the audience. The presentations were less a journey of discovery and more a test of extreme endurance.

I had one job at the front of the room and I blew it.

“Beautiful slides and a charismatic stage presence are all very well, but if there’s no real takeaway, all the speaker has done – at best – is entertain,” says Chris Anderson, head of TED and author of the Official TED Guide to Public Speaking. TED is a non-profit devoted to spreading great ideas through conferences, videos, books, programs and prizes.

“Your number one mission as a speaker is to take something that matters deeply to you and to rebuild it inside the minds of your listeners,” says Anderson. “If you can conjure up a compelling idea in people’s minds, you have done something wondrous. You have given them a gift of incalculable value.”|

To get inside your listeners’ heads, your presentation must have a throughline. It’s the connecting theme that ties together your talk from start to finish.  “Think of the throughline as a strong cord or rope, onto which you will attach all the elements that are part of the idea you’re building,” says Anderson.

The best throughlines can be encapsulated in 15 words or less. Those 15 words should speak to your passion, spark curiosity and persuade others to hear what you have to say. “It’s not enough to think of your goal as ‘I want to inspire the audience’ or ‘I want to win support for my work’. It has to be more focused than that. What is the precise idea you want to build inside your listeners? What is their takeaway?”

Here are the throughlines for some of the most watched TED Talks:

Once you’ve figured out your throughline, you’re ready to build your talk through connection, narration, explanation, persuasion and revelation.  Anderson devotes a chapter to each talk-building tool.

He also makes a convincing case for learning how to stand and deliver at work and in the community. “Presentation literacy isn’t an optional extra for the few. It’s a core skill for the 21st century. It’s the most impactful way to share who you are and what you care about.

“We are physically connected to each other like never before. Which means that our ability to share our best ideas with each other matters more than it ever has. The single greatest lesson I have learned from listening to TED Talks is this: the future is not yet written. We are all, collectively in the process of writing it. There’s an open page – and an empty stage – waiting for your contribution.”

I’ve collected an entire shelf worth of books on how to build presentations, write speeches and give talks. Anderson’s book is among the most practical and insightful. If you have a great idea worth sharing and you want to stay out of the public speakers’ hall of shame, get a copy of the Official TED Guide to Public Speaking.

@jayrobb serves as director of communications for Mohawk College and lives in Hamilton. 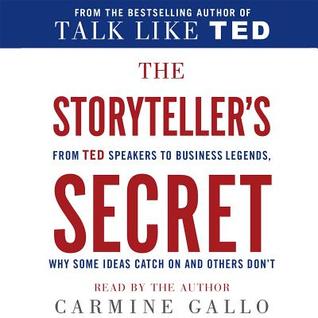 This review first ran in the April 11th edition of The Hamilton Spectator.

The Storyteller’s Secret: Why Some Ideas Catch On and Others Don’t

The good news is you’ve decided not to inflict death by PowerPoint.

The bad news is you’re giving your own version of a TED Talk. And you’re just going to wing it.

You’ve watched the videos so you know the drill.

Skip the lectern and stand instead in the middle of the stage.

Don’t read from a script or use speaking notes.

Throw a few photos and words up on the screen.

Wrap things up in under 18 minutes.

Be gracious when the audience gives you a standing ovation.

Someone needs to do a TED Talk about how hard it is to do a TED Talk. Show us the weeks and months of preparation, the search for the perfect story, the rounds of rewrites and the rehearsals with coaches who perfect every word, pause, inflection, expression and hand gesture. TED Talks look spontaneous and unscripted but don’t be fooled into thinking you can do the same without logging serious hours of prep time.

It’s not enough to just get up and tell us a story.

Yes, we’re hardwired for storytelling. We’ve been telling stories since the dawn of time.

But there’s an important caveat. We don’t like boring stories badly told.

The Neanderthals who grunted out lousy stories around the campfire were likely banished to the back of the cave or clubbed to death with a bison bone.

Your audience will think the same thing if you’ve overestimated your storytelling abilities. Despite your best intentions, you may leave us longing for your supersized PowerPoint decks.

The harsh truth is that not all of us know how to spot and then tell a story.

To help us do better, Carmine Gallo introduce us to more than 50 leaders who know how to stand and deliver. Gallo profiles master storytellers who’ve given some of the most viewed and highly rated TED Talks.

“A good story can help explain an idea,” says Gallo, communications coach and author of The Storyteller’s Secret. “A great story educates, entertains, inspires and ultimately fires up our collective imagination. Tell great ones.”

Great stories are the coin of the realm, whether you’re an entrepreneur pitching to investors or a leader drumming up employee support for a new project. “The ability to sell our ideas in the form of story is more important than ever. Your ability to package your ideas with emotion, context and relevancy is the one skill that will make you more valuable in the next decade.”

Sir Richard Branson is one of the storytellers profiled Gallo.  A select group of entrepreneurs are invited to Branson’s home in the British Virgin Islands for the Extreme Tech Challenge. They each have10 minutes to pitch their idea or product.

“They must grab Branson’s attention, convince him that the idea has the potential to positively impact the world, and inspire him to make a substantial financial commitment to the company,” says Gallo, who’s coached some of the entrepreneurs who’ve pitched Branson.

Many initially plan to talk exclusively about financials, numbers and data. “They are only partly right. These entrepreneurs are neglecting the core findings of neuroscience: emotion trumps logic. You cannot reach a person’s head without first touching their heart.”

Branson is a big believer in the art of storytelling to drive change. “Telling a story is one of the best ways we have of coming up with new ideas, and also of learning about each other and the world,” says Branson.

Along with the storyteller profiles, Gallo opens the toolbox used by leaders to educate, simplify, motivate and launch movements.

Raid the toolbox before you ditch the PowerPoint decks and invite investors and employees to gather around the campfire. Learn how to tell a great story and they won’t be overcome with the urge to beat you with a bison bone.