Drawing from some of the best business books I read and reviewed last year for the Hamilton Spectator, here are five great ideas  to carry over into 2018.

Add an accountability filter to your 2018 employee engagement survey. Add questions that will let you separate out answers from two very different kinds of employees. Pay close attention to what high-accountable employees are telling you. They’re the high performers who’ll suggest ways to make your organization better for customers, clients, patients or students. Don’t waste time, money or effort in trying to shore up satisfaction scores of low-accountable employees who will only give you a list of demands on how to make their lives easier. “If we really want our engagement surveys to drive workplace results, then we need to be honest,” says Cy Wakeman, author of No Ego – How Leaders Can Cut the Cost of Workplace Drama, End Entitlement and Drive Big Results. “Not all employees contribute equally, and the feedback they offer isn’t equal either. Treating all feedback equally is crazy.” So too is holding managers accountable for driving up satisfaction scores among employees who contribute little or nothing to the organization.

Help yourself by helping others first. Adopt what Ryan Holiday calls the canvas strategy. “Find canvasses for others to paint on,” says Holiday in Ego is the Enemy. “Whereas everyone else wants to get credit and be respected, you can forget credit. You can forget it so hard that you’re glad when others get it instead of you – that was your aim after all. Let the others take the credit on credit, while you defer and earn interest on the principle.” This is one way to keep your ego in check in 2018 and not allow a false sense of superiority to exceed the bounds of confidence and talent.

Start practicing radical candor. Care personally and challenge directly in 2018. Find the courage to deliver difficult yet necessary feedback, make tough calls and set a high bar for results. At the same time, let people know that you care them. “When people trust you and believe you care about them, they are much more likely to accept and act on your praise and criticism,” says Kim Scott in Radical Candor – Be a Kick-Ass Boss Without Losing Your Humanity. You do yourself and the people around you no favours when you put being liked ahead of saying and doing what needs to be said and done.

Pick an event that your organization runs every year and shake up the status quo. Don’t settle for what Chip and Dan Heath call the soul-sucking force of reasonableness. Invest the time and extra money to create a stand-out experience in 2018 that everyone in the room will remember and everyone else will wish they had attended. “Moments matter,” say the Heaths in The Power of Moments. “And what an opportunity we miss when we leave them to chance. Teachers can inspire, caregivers can comfort, service workers can delight, politicians can unite and managers can motivate. All it takes is a bit of insight and forethought. We can be the designers of moments that deliver elevation and insight and pride and connection.” 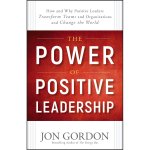 Make sure everyone in your organization has the same answers to two fundamental questions. What do we stand for? And what do we want to be known for? The answers will define your organization’s culture in 2018. Average organizations have mission statements. Great organizations have people who are on a mission. The difference comes down to culture. “Your most important job as a leader is to drive the culture,” says Jon Gordon in The Power of Positive Leadership. “You must create a positive culture that energizes and encourages people, fosters connected relationships and great teamwork, empowers and enables people to do their best work.”

@jayrobb serves as director of communications for Mohawk College, lives in Hamilton and has reviewed business books for the Hamilton Spectator since 1999. 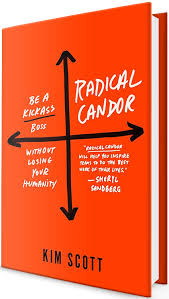 This review first ran in the April 24th edition of The Hamilton Spectator.

Radical Candor: Be a Kick-Ass Boss Without Losing Your Humanity

If you don’t have anything nice to say, don’t say anything at all.

Unless you’re a boss. And then it’s your job and moral obligation to say things that aren’t nice but necessary.

Bosses get paid to guide teams to achieve results, says Radical Candor author Kim Scott, who’s been a boss at Apple and Google and an advisor to Silicon Valley companies.

The best way to do this is with radical candor. Scott says this management philosophy combines caring personally and challenging directly.

Start by treating the people who work for you as human beings. “It’s not just business; it is personal and deeply personal,” says Scott.

And one way to show you care is by telling them when their work isn’t up to their standards or yours. You challenge directly by delivering hard feedback, making tough calls and holding a high bar for results.

“When people trust you and believe you care about them, they are much more likely to accept and act on your praise and criticism,” says Scott.

The alternatives to radical candor are obnoxious aggression, manipulative insincerity and ruinous empathy. All three can lead you and your team to ruin.

When you challenge directly but don’t care personally, you come across as an aggressive and obnoxious jerk. Bosses do this when they belittle and berate, publicly embarrass and humiliate and freeze out members of their team.

When you don’t challenge directly and don’t care personally, you’re manipulative and insincere. “People give praise and criticism that is manipulatively insincere when they are too focused on being liked or think they can gain some sort of political advantage by being fake – or when they are just too tired to care or argue any more.”

And when you care personally but don’t challenge directly, you’re practicing ruinous empathy. It’s responsible for most of the management mistakes Scott has seen in her career. “Most people want to avoid creating tension or discomfort at work. They are like the well-meaning parent who cannot bear to discipline their kids. They create the kind of work environment where being nice is prioritized at the expense of critiquing, and therefore, improving actual performance.”

Imagine a colleague comes back from lunch with spinach in her teeth. Radical candor is you whispering to her “there’s spinach in your teeth.” Obnoxious aggression is shouting “look at her, she has spinach in her teeth.” Manipulative insincerity is saying nothing because you need to be liked above all else and don’t want to risk having your co-worker be mad at you. Ruinous empathy is saying nothing because you’re worried about hurting your co-worker’s feelings even though she’ll wonder why you didn’t care enough to save her from embarrassment.

Radical candor is the key to building trusting relationships with each person who reports directly to you. Scott says these core relationships will decide your fate as a boss and whether your team delivers results or comes up short.

“Your relationships and your responsibilities reinforce each other positively or negatively, and this dynamic is what drives you forward as a manager – or leaves you dead in the water. Your ability to build trusting, human connections with the people who report directly to you will determine the quality of everything that follows.”

The best way to give radical candor is to first welcome it from your team. Prove you can take it before dishing it out. “Soliciting guidance, especially criticism, is not something you do once and check off your list – this will now be something you do daily. But it’ll happen in little one to two-minute conversations, not in meetings you have to add to your calendar.”

Radical Candor should be mandatory reading for everyone in a leadership role. Scott makes the case for caring personally and challenging directly and shows how to say things that aren’t nice yet absolutely necessary for getting the best out of the people you lead.

@jayrobb serves as director of communications for Mohawk College, lives in Hamilton and has reviewed business books for the Hamilton Spectator since 1999.