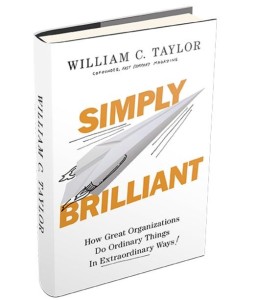 This review first ran in the Oct. 24 edition of The Hamilton Spectator.

Would you get married in a parking garage?

Would you go there for wine-tastings, yoga classes and fundraisers?

Would you live in one?

They do in Miami Beach.

1111 Lincoln Road is a one-of-a-kind parking garage.  Developer Robert Wennett hired the architects who designed the Tate Modern in London and Beijing’s Bird’s Nest Olympic Stadium and invested $65 million to transform the garage into a commercial property, cultural landmark and civic space.

Along with 300 parking spots, the seven-storey garage is filled with public art, high-end restaurants and boutiques. The building has a central winding staircase and offers 360-degree unobstructed skyline views. Wennett lives in a penthouse on the top floor.

So how about your organization? What story are you telling?  What are you doing that’s unexpected and unforgettable?

Or have you opted to stick with the familiar and settle for dull? If so, don’t worry because you’re not alone.

“This quiet brand of failure – a failure of imagination, a failure of nerve, a failure to muster the will to break from the past – has become a familiar part of the business landscape,” says William Taylor, author of Simply Brilliant and cofounder of Fast Company magazine.

“The problem with most organizations is not that they are broken. It’s that they are boring. And boring organizations don’t lend themselves to runaway success. The real action, the true agenda, for leaders is in closing ‘opportunity gaps’ – the difference between what is and what could be.”

To stand out and stand alone, Taylor says runaway success comes from doing what your competitors can’t or won’t do.  Your customers want to be impressed and surprised. They want you to do something memorable.

Taylor profiles 15 organizations that do exactly that, including Metro Bank in Britain, Pal’s Sudden Service in northeast Tennessee and southwest Virginia, and SouthCentral Foundation, a nonprofit that delivers health care to 65,000 Alaska Native and American Indian customer-owners (calling them patients is verboten).

And then there’s the 100,000 Homes Campaign. Launched by Community Solutions in New York City, the campaign aimed to secure permanent housing for 100,000 chronically homeless Americans in four years without a major influx of government funding. Nearly 190 cities and towns came up with grassroots efforts that ultimately housed 105,580 homeless.

“Nobody I know signed up to work on homelessness for job security,” says Community Solutions founder Rosanne Haggerty. “But somehow we created a ‘homeless-industrial complex’ that is good at running programs but has given up on solving the problem. We realized that doing more of the same was absurd. We asked organizations to wrestle with the consequences of doing business differently.”

If you’re looking to do business differently in your organization and in our community, you’ll find inspiration in Taylor’s book.

“The thrill of breakthrough creativity and breakaway performance doesn’t belong just to the youngest companies with the most cutting-edge technology or the most radical business strategies,” says Taylor. “It can be summoned in all sorts of industries and all walks of life, if leaders can reimagine what’s possible in their fields. The opportunity to reach the extraordinary may be most pronounced in settings that have been far too ordinary for far too long.”

@jayrobb serves as director of communications for Mohawk College, has reviewed business books for the Hamilton Spectator since 1999 and lives in Hamilton.

Review: Players – The Story of Sports and Money and the Visionaries Who Fought to Create a Revolution by Matthew Futterman

This review first ran in the Oct. 11 edition of The Hamilton Spectator.

Players: The Story of Sports and Money and the Visionaries Who Fought to Create a Revolution 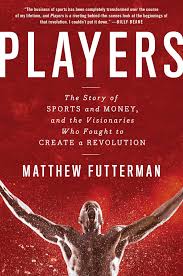 Edwin Encarnacion is about to get paid.

Count on an MLB team to break the bank with a long-term deal that pays Edwin more in a season than you, me and our kids will earn in our lifetimes.

We shouldn’t begrudge Edwin his payday, even if he winds up launching homers over the Green Monster at Fenway Park for the Boston Red Sox.

It wasn’t that long ago that professional athletes like Edwin were paid a pittance and worked second jobs to make ends meet.

In his first season as starting quarterback for the Dallas Cowboys, Roger Staubach was paid $25,000. Instead of training in the off-season, the future Hall of Famer sold commercial real-estate.

“Stauback didn’t begin showing Dallas-area office and warehouse space in the early 1970s because he loved the business or planned eventually to become a property mogul,” says Matthew Futterman,  author of Players: The Story of Sports and Money and the Visionaries Who Fought to Create a Revolution. “He did it because he had a young family and he needed the money.”

Fast forward to Tony Romo. In 2013, the Cowboys’ QB signed a six-year $108 million contract extension with $55 million in guaranteed money and a $25 million signing bonus.

“In the span of a generation, everything about the sports business changed,” says Futterman.

The senior special writer for sports with the Wall Street Journal argues it’s been a change for the better for both athletes and the fans who cheer them on.

“The story of professional sports for the first eight decades of the twentieth century is largely one of exploitation. It’s a story of one-sided contracts and lopsided deals in which teams, leagues, national and international sports federations, and countless other moneyed interests who had put themselves into positions of power took advantage of athletes who were some combination of too young, too uninformed, or to uneducated to realize just how they were being used, and too unrepresented and unorganized to do anything about it.

“Despite the inevitable pitfalls and crassness money has wrought, money has also made athletes and the sports they play immeasurably better. An upside-down business needed to be turned right-side up, for better or for worse.”

Futterman says the revolution started with golf legend Arnold Palmer and his lawyer-turned-agent Mark McCormack. Palmer had signed a deal with the Wilson Sporting Goods Company weeks after winning the US Amateur Championship. He never had a lawyer review the contract. Wilson made a fortune selling Palmer-branded clubs and balls and paid pocket change to the King.

“The original contract Arnold Palmer signed with Wilson was undoubtedly among the worst deals any athlete of Palmer’s caliber has ever signed,” says Futterman. McCormack eventually won Palmer his freedom and his annual off-the-course income soared from $5,000 to $500,000.

“The extrication of Arnold Palmer from Wilson and Palmer’s ability to take control of his name, his value and everything associated with it would stand as the template for every deal McCormack would try to make for every iconic athlete and property for the rest of his career. This wasn’t simply about money. McCormack was playing a new game. The object was liberation. Freedom would lead to more money – not just for the athletes but for everyone involved.”

“The powers that be liked things just the way they were, with their athletes scrounging for crumbs at the bottom of the pyramid. The battles the men in charge waged against the athletes, the fallout from those battles, and how that revolution created the behemoth that sports have become is the arc of this story. It’s an attempt to understand how we got to a place where sports is simultaneously a highly produced, often over-commercialized extravaganza but also a thrilling Darwinian narrative filled with surprise and intrigue.”

Jay Robb serves as director of communications for Mohawk College, has reviewed business books for the Hamilton Spectator since 1999, lives in Hamilton and will cheer for Edwin Encarnacion regardless of who he plays for next season.