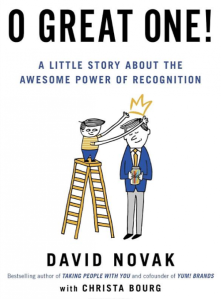 This review first ran in the Aug. 15 edition of The Hamilton Spectator.

O Great One! A Little Story About The Awesome Power of Recognition

It costs nothing to say thank you.

But an inability or unwillingness to give thanks should cost clueless senior managers their jobs, according to David Novak.

“I wanted to tell this story because I’ve seen how impactful recognition can be,” says Novak, author of O Great One! and the cofounder, former chairman and CEO of Yum! Brands – one of the world’s largest restaurant companies with more than 1.5 million employees in 125 countries.

“I’ve also witnessed how devastating it can be when it’s absent from the life of an individual, a team and even a large organization. Considering that recognition can have such a hugely positive effect, it’s amazing to me that it’s still vastly underused in business, and also in life. I think that’s a crime.”

You don’t delegate recognition to Human Resources or pawn it off on a task force that’ll spend a year dreaming up mandatory and standardized ways to have fun on the job.

Recognition is your responsibility and first priority as a leader, says Novak who’s been named CEO of the Year by Chief Executive, one of the 30 best CEOs by Barron’s, one of the top people in business by Fortune and one of the 100 best performing CEOs in the world by Harvard Business Review (add mensch to the list, as Novak is donating 100 per cent of the profits from his book to the Wendy Novak Diabetes Center).

As a leader, you cast a long shadow across your organization. If you want people to continue doing their jobs well then you need to recognize a job well done.

“If you use recognition on a regular basis, you can inspire people to do great things. And the personal satisfaction you’ll receive as a result, when you see others reach their full potential with your help…well, that’s when the real magic kicks in.”

Novak sets out 10 guiding principles for motivating and recognizing employees:

Novak makes his case by telling a fictional story about a reluctant CEO who uses the power of recognition to win over a skeptical executive team and save a faltering family business. Given Novak’s track record as a celebrated CEO, his advice is worth heeding.

“If you give people the recognition they’ve earned, if you show genuine appreciation and acknowledge the unique things people have to offer, then you will drive real results. And at the same time, you will lift the spirits of everyone involved.”

Jay Robb serves as director of communications for Mohawk College and has reviewed business books for the Hamilton Spectator since 1999.