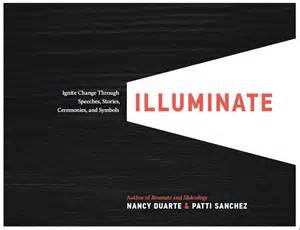 This review first ran in the March 14 edition of The Hamilton Spectator.

By Nancy Duarte and Patti Sanchez

Prepare to be underwhelmed when you tell us a project will trigger transformational change.

Transformational change is a thrill ride when you’re in the driver’s seat. You’re restless and ready to roll. You’ve seen the future and what’s on the horizon.  You know that standing still will get us left behind or run over.  And you’re convinced that what’s next is superior in every way to where we’re at right now.

But we’re in the passenger seat and our view’s more terrifying than thrilling. We don’t know where we’re going or why we need to go.

For some of us, this isn’t our first rodeo. We’ve ridden the Transformational Change Express before and found ourselves stranded a few stops short of the Promised Land.

And for others, the ride seems as exhausting as a cross-Canada summer roadtrip in a car with busted air conditioning and the K-Tell Mini Pop Kids belting out the hits from the backseat.

So it’s not enough to just talk about transformational change. You need to step up and light the way if you want us to follow.

“To boldly go into the future is one thing. To get others to go there with you is another entirely,” say Nancy Duarte and Patti Sanchez, authors of Illuminate and executives with the largest design firm in Silicon Valley.

“The leader’s role, our role, is to light the way for your team through empathetic communications – to be a torchbearer,” says Duarte and Sanchez. “Torchbearers are dreamers, pioneers and scouts who are energized to light the path for travelers. You may see the path ahead with clarity but the outcome of your venture is not really up to you. Your idea is the spark, but you need others to carry the fire on the long trek ahead.”

Luckily for you, there’s a torchbearer’s toolkit. In it you’ll find speeches, stories, ceremonies and symbols.

You give speeches to persuade. You tell stories to win hearts and minds. You hold ceremonies to celebrate milestones, build community and sustain our commitment.

And you put symbols into your speeches, stories and ceremonies. “Because of their resonance, symbols become the visual language of a social group. They express a people’s thoughts, feelings and values in a shorthand and sometimes highly charged way.”

The speeches you give, the stories you tell and the ceremonies you hold will vary depending on where we’re at in our journey.

Change happens in five stages and those stages make up what Duarte and Sanchez call the Venture Scape.

“Like a story, your Venture Scape has a beginning, middle and end. Change has an identifiable pattern to it.”

Change starts with a dream stage where you tell and sell your vision for the future.  Your vision needs to be clear and compelling if we’re going to buy in.

The leap stage follows and this is where you need us to commit, take on new responsibilities and change our behaviors.

We then move into the fight stage. You need us to find the courage to be equal to the challenges ahead and gear up for battle.

The climb stage is where the going gets rough, our enthusiasm wanes and our resolve wavers. We’re not having fun anymore. We’re wondering if the sacrifice is worth the reward.

And then we finally cross the finish line at the arrival stage. It’s a time to celebrate and reflect on what’ve accomplished, whether we succeeded or fell short.

Starbucks, IBM and Apple are among the companies that Duarte and Sanchez use as case studies to show the power of synching speeches, stories, ceremonies and symbols to the five stage-Venture Scape.

With every case study, there was a leader who lit the way.  You won’t pull off transformational change without one. Duarte and Sanchez show how you can be the one.

“Some say being a torchbearer is a burden. Some say it’s a blessing. Either way, those who light the path are the ones who change the world.”