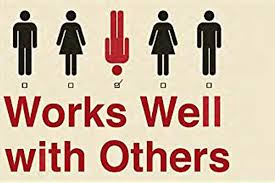 This review first ran in the Dec.  7 edition of The Hamilton Spectator

Works Well With Others: An Outsider’s Guide to Shaking Hands, Shutting Up, Handling Jerks and Other Crucial Skills in Business That No One Ever Teaches You

You expect to be called out at any moment and asked to clean out your desk and turn in your keys.

After all, you’re in over your head. You’re making it up as you go along.

You work with supremely confident and well-connected colleagues who always seem to know the score and are blessed with social graces and stellar pedigrees.

Whatever success you’ve had  can be chalked up to dumb luck and your career really isn’t all that impressive on close inspection.

You’re suffering from an acute case of impostor syndrome. Ross McCammon, author of “Works Well With Others,” feels your pain and has a remedy.

McCammon was editing Southwest Airlines’ inflight magazine in Texas when he was recruited to join Esquire magazine in New York City.

It was a tough transition.

And then McCammon discovered he wasn’t alone. “No matter how famous or important, everyone is just really weird and really nervous. Especially the people who don’t seem weird or nervous.

“I came to see that the difference between those who are successful and those who aren’t isn’t just talent or behaviour. They were just better at seeming better. They acted like they belonged. They seemed to claim success by performing its mechanics with confidence.”

It turns out you really should sweat the small stuff. It’s the stuff that no one ever talks about or teaches you in school.

Yet you need to know how to shake hands and how to smile. You need to master the art of having business lunches in overpriced restaurants with important people and carrying out short yet meaningful conversations in elevators. You should be able to deliver speeches, raise a pint to toast your coworkers and make a graceful exit from office parties.

“The small things can cause crippling anxiety when you don’t think you have a handle on them,” says McCammon. “The small things are of huge practical importance — they’re what make other people feel comfortable around you, make an immediate impression, and cover up mistakes. The small things are emblematic of greatness, signals to others that you are not messing around, code for integrity, dedication and consideration.”

Here’s an invaluable lesson about a small thing. You’re headed to your first staff meeting and wondering how much you should talk. Follow McCammon’s foolproof four-point plan:

“In meetings, you prove your worth through discretion, not action, by saying just what it is you know and by saying it clearly and concisely and then shutting up. Here’s the test. Are you interested in what you’re saying? If not, then stop saying it.”

And you may also want to shut up on social media. McCammon cites a 2014 survey where 51 per cent of employers found content on social media that caused them to take a pass on a job candidate.

“Your social media presence isn’t you,” says McCammon. “It’s a fantasy. And it might be a fantasy that an employer can’t reconcile with the person they thought they wanted to hire.”

McCammon’s written a smart and self-deprecating survival guide for anyone who feels like an outsider at work and wants relief from workplace anxiety.