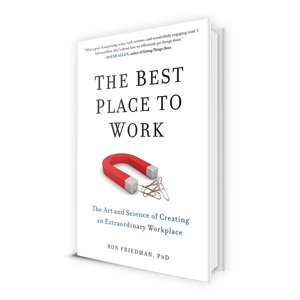 This review first ran in the May 11 edition of The Hamilton Spectator.

The Best Place to Work: The Art and Science of Creating an Extraordinary Workplace

Throw your kids for a loop at the dinner table tonight.

Skip the usual questions. Don’t ask if they had a good day or what they learned at school.

Instead, ask your pride and joy what they failed at today.

It’s also a question worth repeating during your next staff meeting.

Sara Blakely’s dad asked this question during every dinner.

“What he did was redefine failure for my brother and me,” Blakely said during an interview with CNN’s Anderson Cooper. “Instead of failure being the outcome, failure became not trying. And it forced me at a young age to want to push myself so much further out of my comfort zone.”

Blakely is the 44-year-old self-made billionaire founder of Spanx. She credits her family’s dinner table conversations for giving her the courage to launch her company when she was 27 years old and had just $5,000 to her name.

“Blakely was taught to interpret failure not as a sign of personal weakness but as an integral part of the learning process,” says Ron Friedman, an award-winning psychologist and author of The Best Place to Work. “It’s this mindset that prepared her to endure the risk involved in starting her own business. When coming up short is viewed as the path to learning, when we accept that failure is simply feedback on what we need to work on next, risk-taking becomes a lot easier.”

Most of us don’t graduate from school with that mindset. We were discouraged from taking risks and punished for making mistakes. Top marks went to students with all the right answers.

At work, we’re told to take smart risks but left to guess what qualifies as smart, dumb or potentially career-limiting. In many organizations, it’s better to hit a single than swing for the fences.  Mistakes are covered up and best forgotten.

But when failure’s not an option, innovation’s not a possibility. When you and your team don’t talk about the mistakes you’ve made, you won’t learn from them and you risk repeating them.

Some companies get it and reward employees who screw up. SurePayroll, a U.S. payroll-processing company, has an annual employee awards program that includes a best new mistake category. You can win gold, silver or bronze plus a cash prize.

“If you don’t encourage people to take risks, then you end up with incrementalism forever,” company president Michael Alter says. “Mistakes are the tuition you pay for success.”

Software development company HCL Technologies has executives create failure curriculum vitaes. If you want to get accepted into the company’s internal leadership program, you need a failure CV that highlights your biggest strikeouts.

“To advance in their careers, potential leaders must first show that they have the ability to turn failure into progress,” says Friedman. “Those who can’t seem to identify any mistakes are presumably told they now have something to put on future applications.”

Rewarding failure is one of dozens of evidence-based and sometimes counterintuitive recommendations that Friedman makes for building a workplace that’s loaded with engaged employees and driven by constant innovation.

“We now have striking proof that many aspects of the modern workplace are outdated, counterproductive and even psychologically harmful. Which is why it should surprise no one when Gallup reports that over 80 per cent of employees worldwide are disengaged. They’re working within structures that make it nearly impossible to thrive.”

So when it comes time to shower your best and brightest with awards and accolades, don’t limit your praise to employees who hit grand slams.  Show some love for employees who go down swinging yet have the courage to step back into the batter’s box and the smarts to adjust their swing.