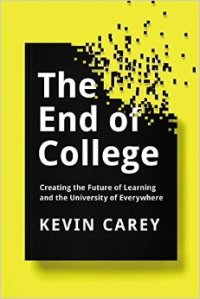 This review first ran in the March 29 edition of The Hamilton Spectator.

The End of College: Creating the Future of Learning and the University of Everything

So who wants to be a billionaire?

You just need to build the Netflix-Amazon-Facebook of higher ed, with thousands of courses available online free of charge for everyone from Albania to Zimbabwe.

Udacity and Coursera are two companies looking to do exactly that.

“From the moment Coursera and Udacity were created, people began asking how they would make money,” says Kevin Carey, author of The End of College.

“This was in some respects the wrong question to ask about an Internet start-up, because the idea was that if you create a free service so elegant and spectacular that the whole world flocks to your virtual doorstep…you will figure out a way to make billions of actual dollars through the sheer force of attraction and scale.”

There’s huge and growing demand for higher education around the world as the ranks of the middle class swell. The global market for education is pegged at $4.6 trillion. Venture capital investment in education technology companies grew from less than $200 million in 2008 to more than $1.2 billion in 2013.

It’s not just Silicon Valley start-ups that are aiming to reinvent colleges and universities.

MIT and Harvard joined forces to launch edX in 2012. It’s a nonprofit that offers hundreds of free online courses custom-built by experts in technology, learning design, education services and videography.

“You don’t hold the rank of America’s best college for almost four centuries without knowing when the time has come to follow the crowd so you can lead them,” Carey says about Harvard’s move to give away courses. “Harvard and MIT are helping to build a new and unprecedented institution: the University of Everywhere. Educational resources that have been scarce and expensive for centuries will be abundant and free”

And that’s good news for people like Battushig Myanganbayar. Battushig was a 15-year-old high school student in Mongolia who took an edX course on circuits and electronics, earned a perfect score and got an offer to attend MIT as a 16-year-old freshman.

“It may be hard for Ivy-obsessed parents and students to believe, but there are actually a large number of very bright students in America and around the world who don’t realize they might successfully apply to an elite college or university,” says Carey.

“Instead of waiting for applications to arrive, colleges will be able to conduct extensive searches of data that students and parents choose to make available. Colleges will be able to analyze that data and make informed judgements about who is most likely to come to campus and thrive, both during their college career and afterward.”

Instead of paper transcripts and a diploma or degree that’s framed or filed away, our kids could graduate with badges for their online profiles. Employers could click on the badges to learn where they earned their credential, their marks on tests plus a portfolio of their projects and assignments. The badges could also be searchable online for employers who are looking for specific skill sets.

“Rather than guessing what a vague credential like bachelor’s of computer science from Big State University at Anytown means, employers can use digital badge metadata to find exactly the person they need,” says Carey.

These are still early days but Carey and the people he interviews see major changes on the near horizon.  Some institutions will thrive, others won’t survive and new ones both real and virtual will be created.

We could soon find ourselves being “educated in digital learning environments of unprecedented sophistication” as artificial intelligence make online courses adaptive to our individual learning styles with “personalized, individual education to large numbers of people at a reasonable price” delivered by colleges and universities.

“While an education in anything to anyone anywhere may sound utopian, an education in most things to most people in most places is a concrete, realistic goal that can be accomplished using existing technology in the near future,” says Carey. “The question is not whether it will happen but who will make it happen.”

I've reviewed more than 500 business books for the Hamilton Spectator since 1999. By day, I serve as communications manager for the Faculty of Science at McMaster University. I've worked in public relations since 1993 and call Hamilton, Ontario home. View more posts