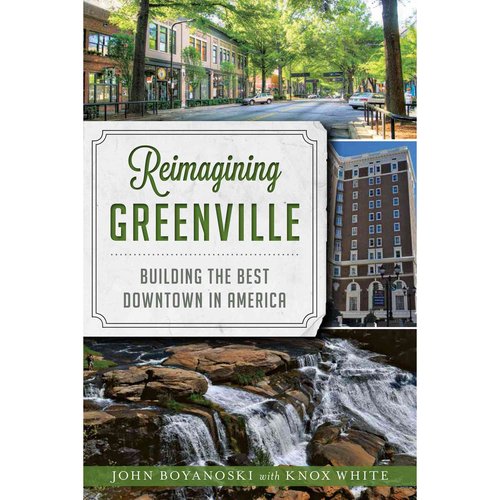 This review first ran in the April 14 edition of The Hamilton Spectator.

By John Boyanoski with Knox White

The reopening of the Royal Connaught will kick downtown renewal into overdrive.

For a preview of what’s in store, look 1,300 kilometres south to Greenville, South Carolina.

Like Hamilton, Greenville had a landmark hotel that had fallen on hard times. Boarded up for a decade, the Poinsett Hotel was a downtown eyesore that cast a long shadow over the renewal that was happening around it.

The hotel was a bricks and mortar symbol of what wasn’t working, says John Boyanoski, a local journalist and author of Reimagining Greenville: Building the Best Downtown in America. “The Poinsett was a visual reminder of the hurdles downtown Greenville faced as its revitalization gained momentum.”

In 1989, Greenville residents were asked to name a great downtown. Less than five per cent chose their hometown.

Mayor Knox White saw the Poinsett as the key to winning back longtime residents who weren’t interested in condos, street festivals and bars for millennials. “Nothing said downtown Greenville was back than the reopening of the Poinsett. It spoke to the older people in Greenville who were the most skeptical about downtown redevelopment.”

The hotel reopened in the Fall of 2000 and $65 million worth of commercial and residential investment in the two blocks surrounding the hotel soon followed. The Westin Poinsett joined a new performing arts centre and stadium as downtown anchors. The ballpark, home to a Boston Red Sox farm team, was built with no taxpayer money and drew 330,078 fans downtown in its first year. Connecting the hotel, arts centre and stadium are more than 90 restaurants and pubs plus high end retail.

To give the downtown a personality and a reason for pedestrians to keep walking the next block, Greenville doubled down on public art. Donor-funded bronze sculptures of local heroes and nine mice hidden throughout downtown are a crowd favourite.

The business-first city council has held firm on its commitment to historical preservation, private-public partnerships and mixed use development in the core.  Since 1999, Greenville has added 1,000 housing units downtown. Underused parking lots have been sold to developers who commit to putting up buildings that offer a mix of office space, restaurants, retail, condos and apartments.

“A typical day in Greenville is something truly to behold,” says Boyanoski. “It is a small southern downtown that is alive 24 hours a day, 7 days a week, 365 days a year. Pick a point at any time of the day and something is going on.”

Renewal has been 30 years in the making and didn’t always come easy. “Every success met with battles and very public opposition,” says Boyanoski. There was pushback on everything from narrowing Main Street from four to two lanes of traffic, widening sidewalks and knocking down a four lane concrete bridge built over a downtown waterfall. The unobstructed falls, with a 23-acre park and pedestrian suspension bridge in the heart of the city, is now Greenville’s main attraction.

The city also took on a night club developer who planned to fill a prime piece of real estate with billiard tables and video poker machines. “Greenville’s road to getting and retaining retail started with a lawsuit, one of the nastiest in city history,” says Boyanoski. Today, the building is home to Mast General Store and jammed with customers.

Above all else, Greenville has been blessed with strong mayors, a committed council and city staff at the top of their game. They’ve followed through on a consultant’s bold blueprint to make downtown Greenville everyone’s neighbourhood.

“The secret to Greenville’s success wasn’t really a secret,” says Knox. “It was planning. It was implementing. It was bringing people together who believed. It was listening to those who didn’t believe. It was changing people’s minds. It was creating a vision and making it happen.”

Three things will happen after reading this book. You’ll want to take a 13 hour summer roadtrip to Greenville, stay at the Westin Poinsett and catch a ballgame. You’ll gain a new appreciation for what downtown renewal means for all Hamiltonians and what’s required to make the core everyone’s neighborhood. And when you step into the voting booth Oct. 27, you’ll cast your vote for strong and visionary local leaders who have the courage to stay the course and not lose sight of the big picture.

I've reviewed more than 500 business books for the Hamilton Spectator since 1999. By day, I serve as communications manager for the Faculty of Science at McMaster University. I've worked in public relations since 1993 and call Hamilton, Ontario home. View more posts